When Tim Woods, the promoter of the show, approached me to see if I was interested in painting a guitar to help promote these concerts, I was, of course, instantly excited. The names were irresistible. Beatles, White Album, Chris Cheney, Tim Rogers etc.

My only stipulation was that the guitar HAD to be a Fender. We couldn’t let all those great names down by painting up a Cort or a Samick!

Tim, like an angel from Mexico, delivered to me a beautiful, brand new, white Fender Stratocaster.

Then it came to painting the guitar. The last thing I wanted to do was use psychedelic colours and big bubbly soft shapes with messages of ‘peace and love’ and surreal floating Beatles stuff. I wanted to ignore the Yellow Submarine and Sgt Peppers style and focus on the White Album and nothing else. No Beatlemania or mop tops or psychedelic visions or Yoko or Skiffle.

So I listened closely to the White Album, looking for my own take on it.

It’s a jagged, sharp and primal recording. Like most double albums you could probably dump a few songs here and there. I don’t want to sound like a musical snob, but if you ignore some of McCartney’s “music hall” meanderings, this is a harsh, sketchy and quite acidic recording. It’s very powerful, and so accomplished across so many genres.

You’ve got John and Paul screaming themselves hoarse on recordings like Helter Skelter and Yer Blues. And George’s guitar sounds are really cutting and abrasive.

But the White Album also delivers some of the Beatles’ most genuine tender moments. Like Dear Prudence, Julia and Mother Nature’s Son. Gone are the pop stylings of songs like Michelle. I mean, no one really believed Michelle was a real person, but you think songs like Julia and Dear Prudence may actually be about real people.

George really starts to shine as a songwriter here. Savoy Truffle and While My Guitar Gently Weeps are two of the strongest tracks on the album. This perhaps adds momentum to the idea that this is the Beatles’ greatest recording as a band.

George has definitely risen to stand comfortably alongside, or at least near, John and Paul as a songwriter. And the production is stripped back enough to show the band really playing as a ‘rock band’.

And they’re fucking good at it. Ringo most definitely included.

Compared to the lavish production of Sgt Peppers, with its surreal and psychedelic themes, this is a raw and earthy recording. John’s experiments are more ‘abstract’ in nature than psychedelic. This is like comparing Dali’s carefully constructed surreal landscapes to Jackson Pollock’s wild abstract creations.

There are also many references to nature and animals. I decided to use these as a visual starting point.

As an artist, I was confronted with two basic problems.1. The vast back catalogue of Beatles-inspired art.
I wondered if there were guidelines one was expected to follow. If Beatles purists would burn my studio down.

I didn’t want to be intimidated or shaped by reverence to either. So I chose to embrace a palette of earthy warm colours as opposed to ‘Swinging London’ brights. These colours seemed to suit the White Album and the Beatles themselves seemed to have left the swirling psychedelic colours and arrangements behind on this recording.

I then had to deconstruct the object (the actual guitar itself) with splashed paint and harsh angles. I attacked the guitar with a combination of spray paint and thick oil-based enamel so the guitar body was no longer clean fresh and intimidating. I didn’t want to feel like a sign-writer painting on someone’s new speedboat, but an artist attacking a blank canvas. I literally threw paint at it to debase it and disempower it. 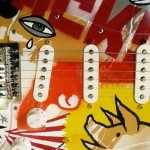 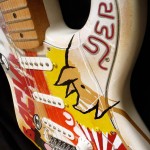 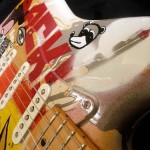 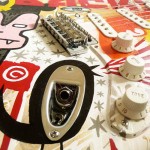 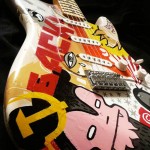 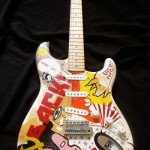 This may sound weird, but as a guitar player, I’ve always wanted a Fender Strat. So I had to look at it like someone working in a bank looks at money. It had to become an abstract idea.

Another aesthetic and philosophical decision I made was that I didn’t want the guitar to look like it had been painted in 1968 or for 1968. I share a big studio space in inner city Melbourne with a lot of young street artists and I wanted that fresh energy to be expressed on to the guitar.

I think that the line-up of the show expresses that feeling of rebirth. The singers aren’t Johnny Farnham, Russel Morris, Barnesy etc. But voices for, and from, a younger generation. Nor are they dressed up as Beatles with mop top wigs or satin military outfits. I wanted the artwork on the guitar to reflect that “changing of the guard”. We don’t expect Richard Tognetti to dress up as Bach, so why not let good musicians and singers present these works sincerely and professionally without all that baggage?

The finished guitar has direct visual reference to ten songs off the album, and is painted with oil-based enamel paints using a combination of spray paint, stencils and freehand. It was quite difficult at times to deal with the contours and obstacles of the guitar as a canvas, and I learnt the hard way that ‘here comes the sun’ is not actually on the White Album. If it was, though, I think you’d have to give the 3 votes to George!